Marco Reus faces a race against time to be fit for the 2022 FIFA World Cup in Qatar after injuring his ankle against Schalke 04 on Saturday. 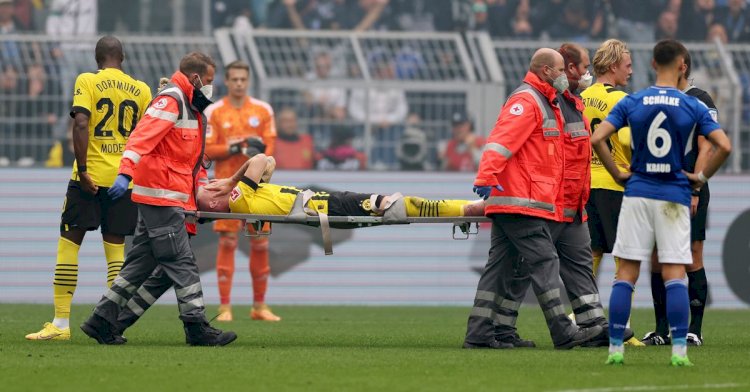 The 33-year-old was stretchered off in the 32nd minute as Borussia Dortmund stormed to the top of the Bundesliga table with a 1-0 win in the Rivierderby.

He is now set to miss Germany's upcoming Nations League matches against Hungary and England, and it remains to be seen if the former Borussia Monchengladbach forward will be fit enough to take his place among Hansi Flick's squad to Qatar.

Reus has also suffered untimely injuries in the past on the cusp of major tournaments, missing Germany's victorious 2014 FIFA World Cup campaign and EURO 2016 with last-minute setbacks.

Reus also opted out of last summer's European championship to recover from a gruelling season for Dortmund after making 48 appearances across all competitions in the 2020/2021 campaign.

"There is no one I talk to more often than our team doctor at the moment," Dortmund manager Edin Terzic said after the game.

"Today it hit our captain. It is extremely bitter, it was extremely unfortunate. Marco injured his ankle.

"I was only able to speak to him briefly at half-time. Then he was in severe pain. How badly the ligaments are injured, we can't answer yet. It's a shame because Marco was in excellent form, he was in great shape and played great."

"He has experienced so many setbacks in his career," added Terzic.

"We had hoped that he would finally be through with it, especially now in the World Cup year. We hope it's not as serious as it looked."

Reus has made 10 appearances this season, scoring three goals and providing four assists.