Olympique Lyon captain Memphis Depay has harshly criticised ultras of the club after one fan brandished a banner calling defender Marcelo a ‘donkey’. 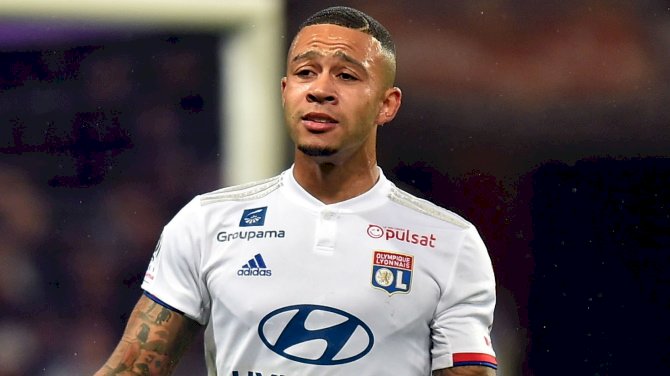 Lyon secured passage to the UEFA Champions League knockout stage on Tuesday after coming from two goals down to draw 2-2 with RB Leipzig at the Groupama Stadium.

Second half goals from Hassem Aouar and Depay cancelled out Emile Forsberg and Timo Werner’s first half penalties to ensure that Lyon grabbed second place, finishing a point above Benfica and Zenit Saint Petersburg, who all finished on seven points.

The final whistle was mired in chaos after a fan crossed over the advertising hoardings, brandishing an offensive Marcelo banner and was confronted by Depay.

The banner bore the image of a donkey asking Marcelo, who has come in for criticism for his performances, to leave the club.

In an emotional post-match interview, Depay told RMC Sport: "Look at my eyes, what do you see? I am furious, angry. I do not know what to say.

"It was not our best game, but we qualified. The players on the pitch gave everything. We played with our hearts and we qualified.

"It is extremely difficult for us knowing someone on the team has problems with the fans, that he's not supported.

"What do you expect from our team? That we're going to go over and thank them? They say crazy things about someone's family, someone's children. I have no words."

He continued: "Frankly, I have to be a little bit careful. It reminds me of my past. I do not want to be that man any longer. I have matured, I am calmer.

"It has no meaning if we cannot celebrate with the fans after the game. As a team, we trust the player, we trust the fans, but they do not trust the team. It hurts to leave the field like this.

"I ran over to try to remove the banner. Who has time to paint a donkey on a flag? If you have time for that, you really have to do something better with your life.

"If you come to the stadium to support us we appreciate it, but you have to appreciate everyone. They have spat on us, on some staff members, some players. I have never seen anything like this."

‘I am Back To My Best’, Lingard Declares

Redknapp Backs Sancho To Deal With The Pressure At Old...

Messi Out For Three Weeks