Lazio have descended on AS Roma manager Jose Mourinho after the latter claimed his city rivals won their game against Spezia over the weekend with an offside goal. 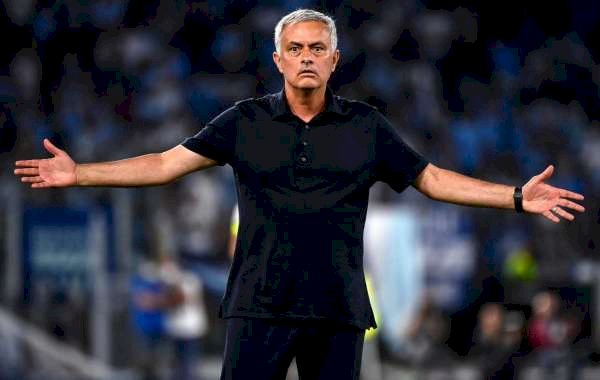 Lazio won their game against Spezia 4-3 with Maurizio Sarri's side's winner coming in the 90th minute under contestous circumstances.

The win saw Lazio draw level on points with fifth placed Roma, who could only manage a goalless stalemate at home to Bologna on Sunday.

With three games to go neither Lazio nor Roma can make the top four as fourth placed Juventus are 10 points clear.

Mourinho took aim at Lazio's winner, telling reporters after the game: “I’ve been coaching 22 years and everything stays the same. A lot of things change in football, but you [the media], don’t.

“After each game there are questions and comments, in 22 years that’s one of the few things that haven’t changed.

But Lazio have not held back in their own criticism of Mourinho, releasing a strongly worded statement to defend themselves.

It read: "The fact that in 2022 a coach of another team, during his press conferences, repeatedly refers to presumed referee favours for competing teams... demonstrates some things.

"That Lazio is obsessively in their thoughts more than other coveted professional goals; that, as often happens, one looks into other people's homes to divert attention from missed results and sensational episodes that have occurred in one's own home.

"That despite the need to evolve the image of football in Italy, some players are stuck with the constant repetition of the accusations against the referees and the VAR; that these offensive attitudes towards the referee category and the lack of journalistic objectivity are too often overlooked.

"Lazio rejects the criticisms and insinuations, it continues to believe that values ​​are demonstrated on the pitch and not in the television studios. Lazio will never lend itself to being anyone's alibi or scapegoat and will assert itself in the appropriate forums.

"The club's line continues to be that of not discussing the decisions taken on the pitch, even when it comes to obvious episodes that occurred to the detriment of the Biancoceleste team, such as Tonali's foul on Acerbi in Lazio v Milan on the occasion of the goal, or the elbow in Ibanez area on Milinkovic in the return derby, just to name two even if we have many others.

"Decisive episodes on which we have chosen silence out of respect for the referees on the field and the VAR, respect that others have not shown and continue not to demonstrate."