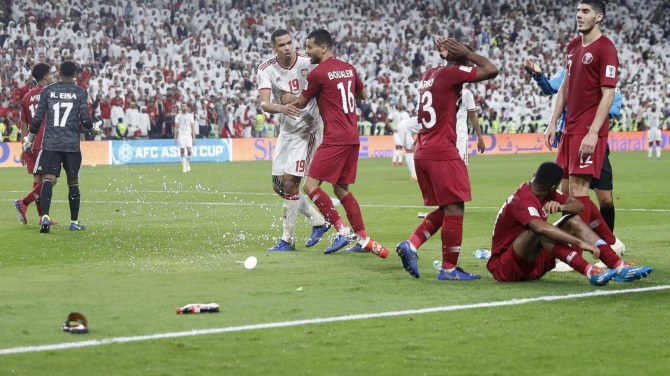 The second semi-final game of the 2019 Asian Cup was marred by fans of host nation, United Arab Emirates, who pelted players of their opponents Qatar with shoes as they celebrated their goals in a 4-0 win on Tuesday.

Build up to the game was dominated by political tension between the two countries, and it translated onto the pitch as the Qatari national anthem was booed by fans of UAE before kick-off.

Qatar, who will host the 2022 FIFA World Cup, were two up before half time, and as they celebrated their third goal after the break, midfielder Salem Al-Hajri was hit on the head by one of the flying shoes.

The shoe-throwing continued throughout the game and brought about intermittent delays during the game as the UAE players begged their fans to discontinue the act.

"The players were aware there was going to be a lot of pressure but they managed their emotions quite well. I'm very proud of them."

Pelting someone with shoes is one of the greatest show of disrespect in the culture of the Middle East as it implies that the dirt picked by the shoes is of better use and essence than the victim.

In December 2008, then-US President George Bush was attacked by an Iraqi broadcast journalist, who threw both of his shoes at the Statesman during a news conference in Iraq.

Qatar will face four-time winners of the Asian Cup, Japan, in the final on Friday.

Victory Over Sheffield United A Good Step For Man City,...

Van Dijk: I Cannot Be Compared To Messi