Zlatan Ibrahimovic has had the statue erected in his honour in Sweden toppled by vandals. 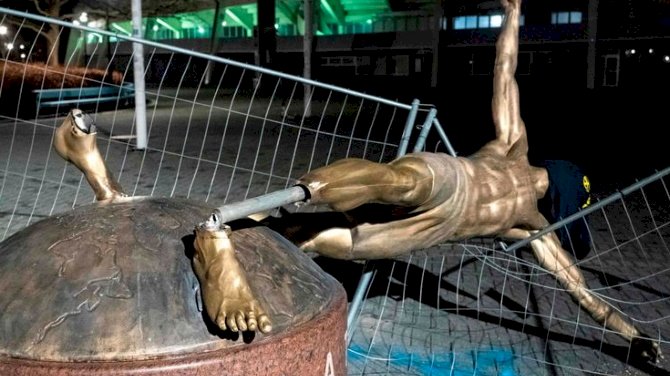 The statue was unveiled last October by the Swedish Football Association outside the grounds of Malmo, the side Ibrahimovic made his professional debut for 20 years ago.

However, in November Ibrahimovic bought a stake in Malmo’s fierce rivals Hammarby, which irked fans of his former side.

The statue has come under repeated attacks ever since as Malmo fans had its nose cut off, attempted to saw through its feet and once put a toilet seat around its outstretched arms.

On Sunday morning, the statue finally came down after vandals sawed it off at the ankles with the words “take away” sprayed across the ground where it stood.

Malmo deputy mayor Frida Trollmyr told AFP: "I can understand that many people are disappointed in Zlatan's behaviour, but vandalising a statute is simply unworthy.

"Better to express your dissatisfaction in a democratic way."

Ibrahimovic is Sweden’s all-time top scorer with 62 goals from 116 caps.

The 38-year-old is set to make his second AC Milan debut against Sampdoria in the Italian Serie A on Monday.

AC Milan will be looking for some inspiration from Ibrahimovic after a difficult start to the season that sees them languishing in 12th position on the league log.

Van Dijk: It Will Be Difficult To Face Messi