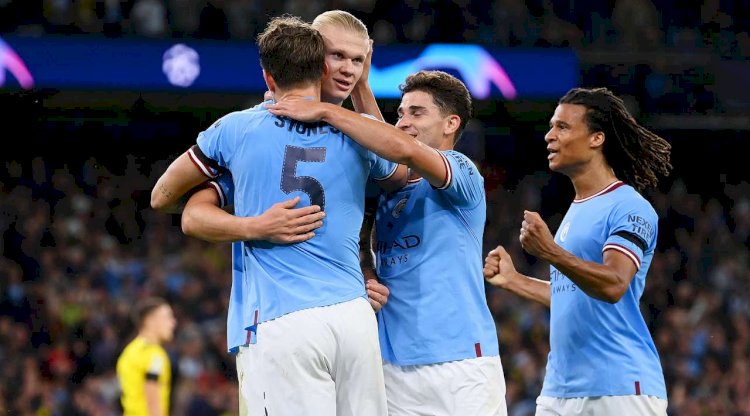 Haaland, who was facing a swift reunion with his former employers, met Joao Cancelo's stupendous cross with an acrobatic effort with just six minutes of the game remaining to give Man City a 2-1 win.

Haaland's goal was his third in the Champions League this season while he has netted 10 times in six Premier League games already.

His latest strike saw Guardiola dig through the annals of history to compare the Norwegian to a former Barcelona great and another mercurial modern-day Swedish legend who could not quite hit the standards at the Camp Nou.

"Maybe the people who know me, you know the influence Johan Cruyff had in my life, as a person, an educator, a manager and mentor, everything," Guardiola said.

"Johan Cruyff, years and years ago at Camp Nou he scored an incredible goal against Atletico Madrid. It was quite similar. The moment he scored the goal I thought, Johan Cruyff.

"It was quite similar. It was a really good one. The pass from Joao is exceptional, he has the ability to do this kind of thing. Simple things, every ball he has, he has to make this kind of action, I know he can do it. That's football, you cannot force it. He made an incredible assist pass and the finishing from Erling was exceptional."

"The first impression that I had, I remember a little bit my friend, my dear friend Ibrahimovic, had this incredible ability to pull back in the air, you know, and Erling is quite similar on that," Guardiola added with a smile.

"He is elastic, flexible and to have that ability to make the contact to put it in the net. He is mature, and he has that flexibility."