Manchester City midfielder Ilkay Gundogan has accused Bruno Fernandes of diving to win the free kick that led to the Red Devils’ opener in the Manchester Derby at Old Trafford on Sunday. 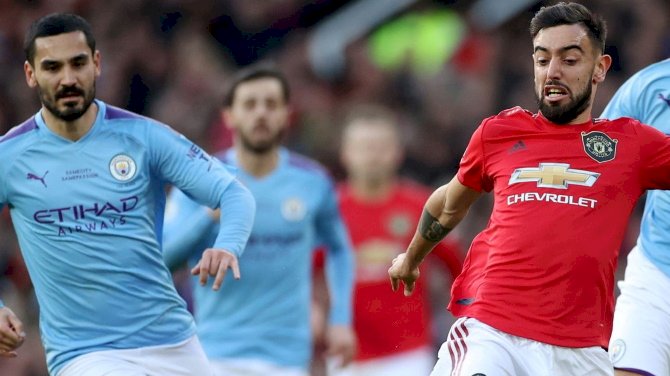 The champions lost for the seventh time in the league this season after goals from Anthony Martial and Scott McTominay saw Ole Gunnar Solskjaer beat Pep Guardiola for the third time this season.

United’s opener arrived in the 30th minute when Fernandes cleverly executed a free kick he had won following a challenge from Gundogan.

Replays showed the former Borussia Dortmund midfielder won the ball while making minimal contact with United’s new boy, and he was livid to see the referee fall for Fernandes’ tricks.

"There was frustration about the free-kick before the goal," Gundogan admitted.

"It was not a foul at all. I just touched the ball and he goes on the floor shouting.

"I don't even know if the referee saw it or just had a feeling that it was a foul. That was very disappointing for me, to be honest, because I was involved in the action and conceding the goal straight afterwards hurt very much. We tried hard after conceding the first one but it just wasn't enough."

Ederson was at fault for both United goals as he failed to grab Martial’s shot before his late throw out resulted in McTominay’s insurance goal but Gundogan refused to lay the blame squarely at the feet of the Brazilian goalkeeper.

"Eddy has been crucial in so many games for us, and he is allowed to make mistakes. Unfortunately, this time they were punished, very crucially for us," Gundogan added.

"We win together and lose together. That's why we play football; that's why we're a team. He will deal with that situation very well. He's angry, disappointed and frustrated, but it's always about how you get out of it. He has all of our support and I'm sure he will do much better in the next games."

Serie A Suspended Amid Increase In Coronavirus Cases

Liverpool Would Have Been Lost Without Firmino, Say Robertson