Former Paraguay international Edgar Benitez has had a collection of over 1,000 jerseys collected during his professional career stolen from his home. 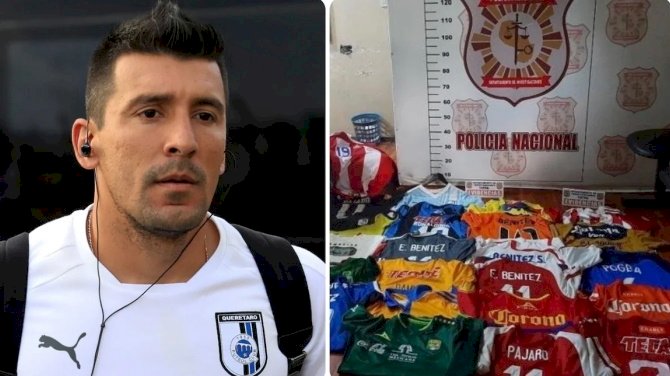 The memorabilia include jerseys worn by the likes of Lionel Messi, Paul Pogba and Ronaldinho.

The items were being kept in him family home, which is undergoing renovation, and one of the two suspects arrested in connection with the theft is part of the construction team working on the house.

Police have been able to retrieve 65 of the stolen items but more than 900 are yet to be returned.

Benitez has taken to social media to plead for the return of the remaining jerseys after it emerged that some were being sold off for as little as £30.

The 32-year-old wrote on Instagram: 'The shirts of my entire soccer life (approximately 1,000), those that I had used with the Paraguayan team, with the clubs that I was playing and those that I exchanged with other soccer players for more than 15 years were stolen from my house, and are being offered to selling on social networks.'

'I appeal to the goodwill of all to let us know of shirts that are being offered and to call their attention for being shirts that can hardly be for sale. All these shirts represent a lot to me because behind each one of them there is an anecdote, a memory that is part of my life and I am infinitely grateful to them for helping me to recover them.'

Neuer To Remain Bayern’s Number One Next Season