Arsenal manager Unai Emery is uncertain whether dethroned club captain Granit Xhaka will ever play for the club again. 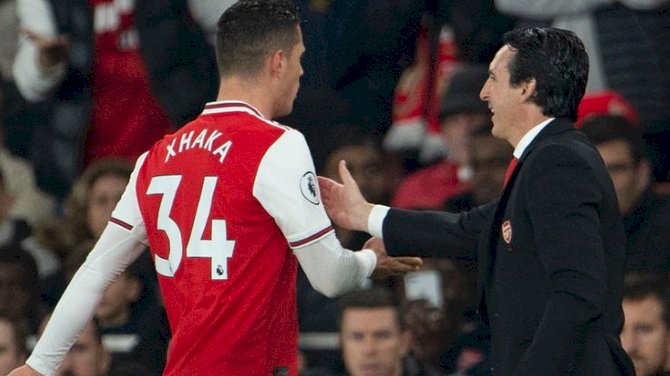 Xhaka has not featured for the Gunners ever since he was involved in an angry confrontation with the club’s fans in a Premier League game against Crystal Palace at the Emirates Stadium a fortnight ago.

That confrontation led to the Switzerland international being stripped off the captaincy with Pierre-Emerick Aubameyang taking his place as full time skipper of Arsenal.

Just like in the last three games, Xhaka will be missing in action when Arsenal travel to the King Power Stadium to take on Leicester City in the Premier League on Saturday.

The former Borussia Monchengladbach man has made it clear to Emery that he is not ready to return to first team action yet, and the Spanish tactician is unsure whether Xhaka will play for the club again.

"As a coach, I have the responsibility of the team. We need one player [like] Granit Xhaka, but also I don't know if he's going to play again. I don't know," Emery said on Friday when asked about Xhaka’s situation.

"The first thing is if he's available in his mind to continue to help us and defend the Arsenal shirt. And then it's if I decide to start him or not with us.

"At the beginning if he's ready and available and 100 per cent in his mind with that decision to help us and to play with his quality to help us because we know we need that quality and that player.

"After we have the solution, but for example after Dani Ceballos' injury we have one less player to use tomorrow in the midfielder, attacking midfielder [role], so we are now not ready with a lot of players to play in that position.

"I don't know. Maybe he can play in the future, maybe he cannot play."

Lampard Wins Premier League Manager Of The Month For October

Jaap Stam Sacked As Manager Of MLS Side FC Cincinnati