Tammy Abraham scored a hattrick as Chelsea gave Frank Lampard a second Premier League win of the season with a resounding 5-2 victory over Wolverhampton Wanderers at Molineux on Saturday. 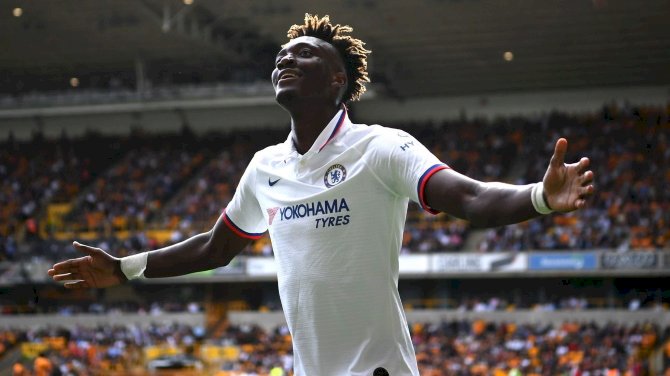 It was a ruthless attacking performance from the Blues who threw away a two-goal lead against Sheffield United last time out but they held on this time after Nuno Esperito Santo’s men threatened to make it a nervy ending with two second half goals of their own.

Academy graduate Fikayo Tomori got things running in the 31st minute when he hit a brilliant 30-yard effort into Rui Patricio’s top corner.

Tammy Abraham had scored braces in consecutive games for the Blues, and the two-time England international scored Chelsea’s second goal of the day in a trice when he tucked home a loose ball in the Wolves penalty area in the 34th minute.

On his first league start of the season, Marcos Alonso provided Abraham with an inch-perfect cross in the 41st minute which was flicked past the Wolves goalkeeper for Chelsea’s third of the day.

Abraham completed his hattrick in the 62nd minute by showing off superb strength and skill to go past Wolves skipper Conor Coady before slotting past Patricio for his seventh goal of the season.

The hosts got one back through an unfortunate own goal by Abraham as the Chelsea striker got the final touch on Roman Saiss’ goal-bound header from a corner in the 69th minute.

Wolves’ summer signing from AC Milan, Patrick Cutrone, looked to have handed the hosts a lifeline when he bundled in their second goal five minutes from time but Mason Mount was on hand to kill off the game for the visitors by curling in a fifth deep into stoppage time.

Charlie Adam Labels Suarez As One Of The Best Strikers...