Arsenal have launched an appeal against the red card dished out to David Luiz against Wolverhampton Wanderers in the Premier League on Tuesday. 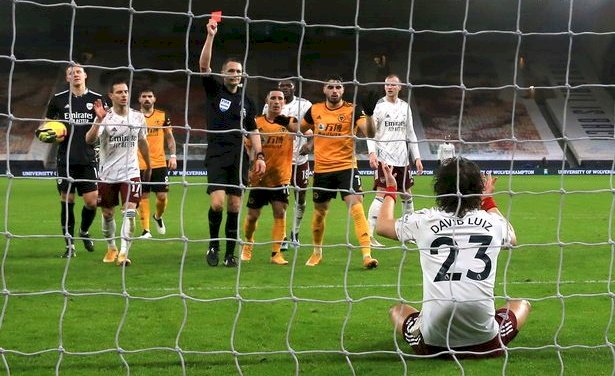 Luiz was sent off on the cusp of halftime by referee Craig Pawson for making contact with Willian Jose while the Real Sociedad loanee was through on goal.

Arsenal went on to lose 2-1 after Ruben Neves tucked home the resulting spot kick to cancel out Nicolas Pepe’s opener for the Gunners before Joao Moutinho struck the winner shortly after the break.

Mikel Arteta’s side finished the game with nine men after goalkeeper Bernd Leno joined Luiz early in the dressing room for handling outside his penalty area.

Arteta has confirmed that Arsenal have appealed against Luiz’s sending off after reviewing several footages of the incident.

"I don't know how long it will take but hopefully today we will have more information.

"We know the law. For me, it's more about the decision, and what happens in that instance. There was a very similar incident, even though David is behind him and against Manchester United he was on the side of the player, it completely changes the angle and how much it affects the player’s ability to finish the action, but still a similar situation. I think they will look at it.

"You look at the two images we can have a long, long debate here. Just to put the finger on David, in my opinion, is not fair."

Luiz has turned out 13 times for Arsenal in the Premier League this season.