Jose Mourinho has expressed dissatisfaction with referee Andre Marriner’s performance in Tottenham’s 1-0 defeat to Chelsea in the Premier League on Thursday night. 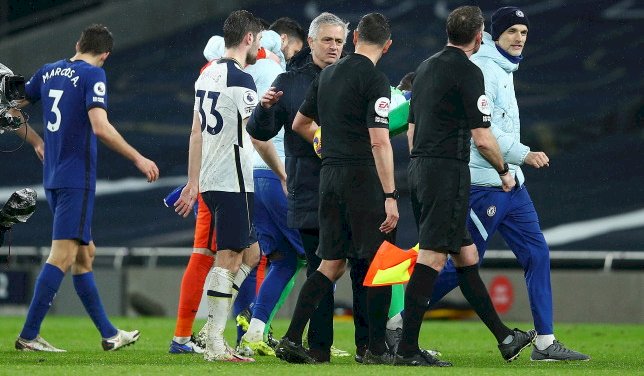 Tottenham lost for the third time in a row after Jorginho’s first half penalty proved decisive as the home side slipped to eighth place on the Premier League table.

Marriner pointed to the spot in the 24th minute after Eric Dier chopped down Timo Werner in the box.

There were little complaints from the Tottenham players when Marriner gave the decision but Mourinho felt it was wrong to award the penalty.

"It was a bit of a struggle but how many chances did they have? We didn't have the ball, correct, we didn't create in the first half, correct," the Portuguese told BT Sport.

"But the struggle was the penalty. In the end a penalty decides the game. In the end they score a penalty which is not a penalty that you say is a dangerous situation, one on one, almost scoring. It's a penalty that is difficult to accept and to lose the game like this is a bit painful.

"But in the second half we were different and Lucas [Moura] and [Erik] Lamela helped to change the dynamic. The feeling I have is that we kept together until the end. To finish with a positive spirit helps.

"Vinicius is a player with an incredible spirit but his understanding of how to press is something he's still not comfortable with. Then in the second half it was much more difficult for them, we pressed them much better and higher and in the second half I believe we deserved a little bit more."

Spurs are back in action against relegation-threatened West Bromwich Albion on Sunday.