Everton manager Carlo Ancelotti has set a target of 30 goals for Richarlison from next season. 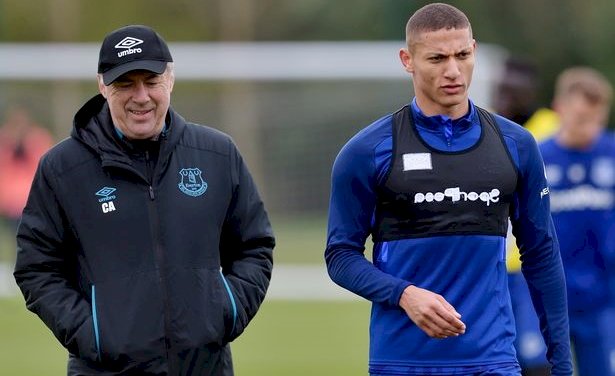 The Brazilian international has been Everton’s main source of goals since completing a £50m move from Watford in the summer of 2018.

Richarlison struck 13 times in the Premier League from 35 appearances in his debut season at Goodison Park and he has gone on to post similar figures in the current campaign.

Earlier this week, Richarlison said he hoped to go past the 20-goal mark from next season but Ancelotti believes the former Fluminense forward has what it takes to do even better.

In his previous spell in England as manager of Chelsea between 2009 and 2011, Ancelotti saw Didier Drogba score a career-high 29 league goals as the Blues won the Premier League in 2010, and the former Real Madrid, AC Milan and Paris Saint Germain manager is hoping Richarlison gets closer to that number.

"I think Richarlison is wrong to say that the target will be 20," Ancelotti told Sky Sports. "The target doesn't have to be 20 for him. It should as a minimum be 30.

"I've had strikers that were able to score 60 goals in a season - it doesn't matter the name [Cristiano Ronaldo scored 61 goals in all competitions for Real Madrid in 2014/15].

"But even in England, Didier Drogba scored 29 goals in one Premier League season alone. So the target for Richarlison will be 30 - not 20."

Eleventh-placed Everton will round off their season with a home game against relegation-threatened Bournemouth later on Sunday.

Wright-Philips Tips Chelsea To Be Title Contenders With...