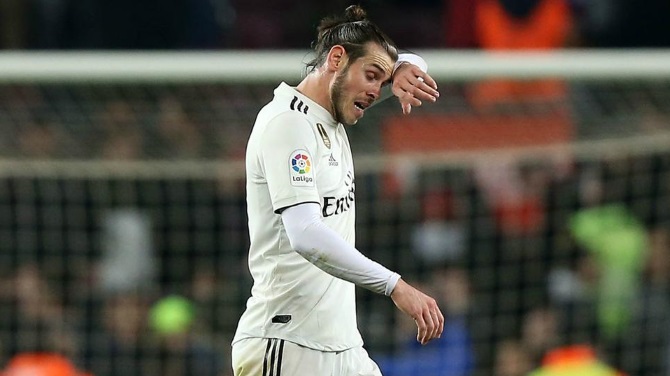 The agent of Real Madrid’s Welsh winger, Gareth Bale, has taken a swipe at the club’s fans over the treatment of his client.

Bale was booed by Real Madrid fans when he was substituted in the 61st minute of last Saturday’s 1-0 loss to Barcelona at the Santiago Bernabeu.

Bale desired to be the main man for Real Madrid after Cristiano Ronaldo departed for Juventus at the start of the season but injury problems and inconsistent form has changed the script.

The former Southampton youngster joined Real Madrid from Tottenham Hotspurs for a then world record fee of €100m in August 2013, but after winning  four Champions League trophies, one La Liga and scoring over 100 goals for the club,the Madridistas have still not taken to Bale.

"This generation of Real fans will be talking about Gareth's goals for years to come," said the 29-year-old's representative, Jonathan Barnett.

"They should be ashamed of themselves. Those fans should be kissing his feet."

"Gareth deserves the greatest of respect. The way Real fans have treated him is nothing short of a disgrace," Barnett added.

"In the six years he has been in Spain, he has won everything. He's one of the best players in the world.

Bale’s demeanor in recent weeks has given credence to reports that he is unsettled at the European champions, especially when he refused to celebrate with his teammates after scoring the winner from the penalty spot against Levante a fortnight ago.

"Despite what the Spanish press are reporting, he's happy, he speaks reasonable Spanish and there is no problem between him and the rest of the Real players. The people writing these things know nothing about him.

"There has not been one single discussion about Gareth leaving Madrid. He isn't going anywhere this summer.

"Despite what's been reported, he's content, he wants to stay at Real and they want him.

"We're fed up of fake stories that he's leaving."

City, Liverpool Win As Title Ends Up In Manchester