Earlier in the day Arsenal were held to a 1-1 draw by Crystal Palace at Selhurst Park with Pierre-Emerick Aubameyang getting sent off in the second half after giving the visitors the lead in the first. Jordan Ayew salvaged a point for Roy Hodgson’s men with a deflected strike in the second. 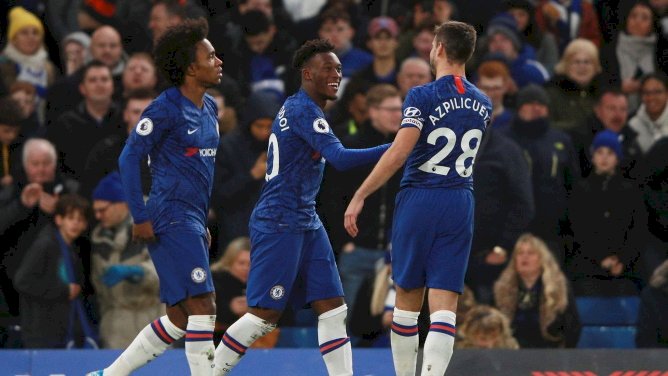 Manchester United returned to winning ways at Old Trafford as they brushed aside relegation candidates Norwich City 4-0 with a double from Marcus Rashford on his 200th appearance for the club. Further goals from Anthony Martial and Mason Greenwood put the gloss on a solid display from Ole Gunnar Solskjaer’s men.

Southampton earned some measure of vengeance for their 9-0 drubbing at the hands of Leicester City earlier in the season by coming away with a priceless 2-1 win. Danny Ings’ 14th goal of the season sealed all three points after Dennis Praet and Stuart Armstrong had earlier traded goals for both sides.

At Stamford Bridge, Callum Hudson-Odoi scored his first ever Premier League goal for Chelsea as Frank Lampard’s men won at home for the first time in three attempts. Jorginho and Tammy Abraham were also on the scoresheet to help the Blues solidify fourth spot.

Newcastle snapped a three-game losing streak by earning a point at Wolverhampton Wanderers following a 1-1 draw. Miguel Almiron scored for Steve Bruce’s men while Leandro Dendoncker equalised for the home side.

Spain And Portugal Set To Launch Joint Bid To Host 2030...