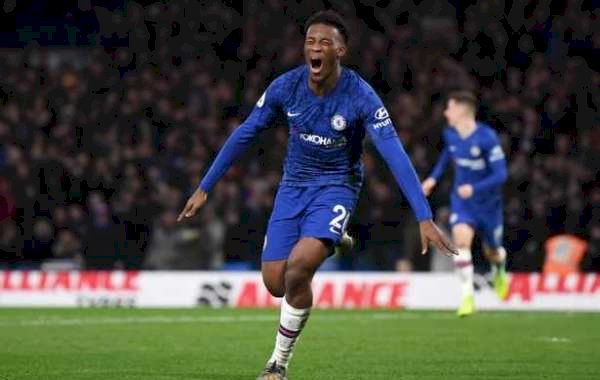 Goals from Jorginho and Tammy Abraham gave the West Londoners a comfortable lead in the first half.

The England international swept home the third goal right after the break for his first Premier League goal, which was given after a brief check from VAR.

The 19-year-old broke into Chelsea’s first team last season under head coach Maurizio Sarri, making ten league appearances before suffering an injury towards the end of the campaign.

After scoring his first league goal in 26 attempts, Hudson Odoi insists he is very elated to have finally gotten the goal, and moreover a win plus a clean sheet.

“I am delighted that I’ve finally got it,” the Englishman said told the official club website.

“The boys put in a massive effort and you could tell that by the way we were playing. We all had the enthusiasm, work-rate and mentality - we wanted to score goals, we wanted to keep a clean sheet”

“We wanted to work really hard and obviously I’m delighted we got the win.”

Prior to the game against the Clarets, Frank Lampard’s men had won only one game out of their last four home league matches, having lost to the likes of West Ham United, Bournemouth and Southampton.

Hudson Odoi said Chelsea does not like losing at home, and they want to build a good form in front of their supporters.

He added: “We never want to lose games, no matter what the game is, so when we do lose at home it’s a sad moment for us.”

“We don’t like losing because we’re a team that wants to win everything and win every game.”

“We wanted to start the home form again and make sure we’re winning games at home. The crowd are with us so we just have to keep winning and we’ll try to take that into the next game.”