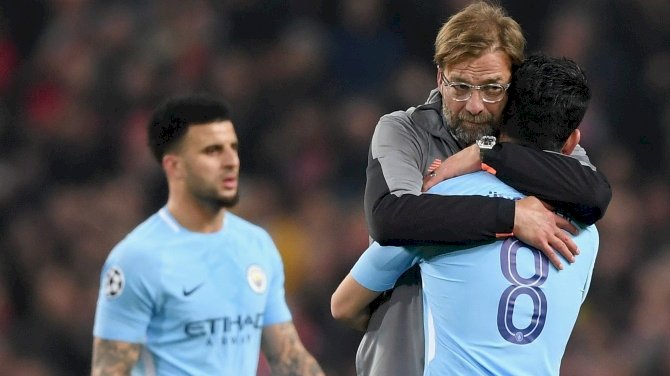 Klopp managed Gundogan during his time as manager of Borussia Dortmund, having signed the midfielder from Nurnberg in the summer of 2011.

Gundogan has endured a number of fitness issues in his career but the 30-year-old has largely stayed injury-free in the 2020/2021 season to help drive Manchester City’s quest to reclaim the Premier League title from Liverpool.

The Germany international is currently enjoying his best goalscoring season, having struck nine times in 23 appearances across all competitions, including seven in the Premier League for Manchester City.

Klopp has been impressed with Gundogan’s form and has described him as one of the best players he has managed.

"Not at all [surprised] - the goalscoring maybe a little bit, the rest not," Klopp said ahead of facing City on Sunday "Ilkay was one of the best players I ever coached.

"He was a very young player when he came to us from Nurnberg to Dortmund. Especially in the 2012 season, he was unbelievable and played pretty much like he is playing now.

"Then he had, unfortunately, some injuries, really tough injuries, but that's now all sorted.

"It's the longest period he can play football without getting interrupted and I wish him really well that he can continue like this.

"That's the only reason. He was always that player.

"When you are smart and experience comes into play as well, then it's another jump in your performance level, and I'm not surprised at all."

Gundogan is one of eight players nominated for the Premier League’s player of the month for January.