Leicester City and Chelsea produced an entertaining 2-2 draw at the King Power Stadium in the Premier League on Saturday. 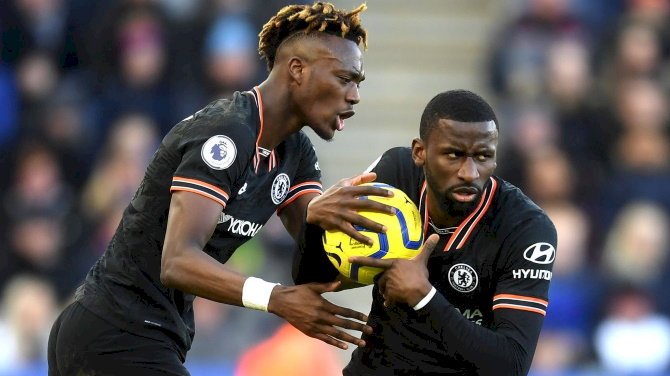 The Foxes remain in third place, eight points above Chelsea, who are fourth.

Brendan Rodgers has now failed to beat Chelsea in 14 attempts as a manager.

Chelsea manager Frank Lampard decided to go with Willy Caballero in goal, dropping the much-maligned Kepa Arrizabalaga, and it was the veteran Argentine who came to the Blues’ rescue by denying Jamie Vardy with his legs in a one-on-one situation after 25 minutes.

On only his second league start of the season, Pedro produced a clever chip on the edge of the penalty area in the 33rd minute but Kasper Schmeichel in the Leicester goal was equal to the task and tipped over.

Within two minutes after the restart Chelsea took the lead as Antonio Rudiger headed in a Mason Mount corner but the hosts hit back almost instantly with Harvey Barnes’ deflected effort looping over Caballero into net just six minutes later for his fourth goal in six games.

Chelsea’s defensive deficiency reared its head again in the 63rd minute when Caballero’s indecisiveness at a Leicester cross resulted in Ben Chilwell steering into an unguarded net from a Youri Tielemans pass.

Tielemans then forced Caballero into a good save with a 20-yard effort four minutes later but Chelsea soon found their equaliser when Rudiger outjumped Chilwell to head in his second of the game from a Mason Mount free kick in the 67th minute.