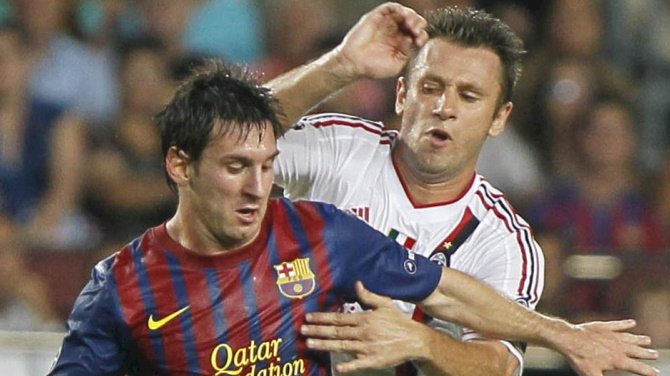 Debate still persists as to who is Argentina’s greatest number 10 between Messi and Maradona.

Maradona famously led Argentina to World Cup glory in 1986 while despite his numerous club successes with Barcelona, Messi is yet to have international glory with his national team.

Cassano however rates Messi above Maradona, having been impressed with his consistency over the years.

"Maradona did something never seen before for four or five years, but Messi has done the same things for 15 years," he said in an interview with Corriere dello Sport.

"The ‘Maradonians’ have to accept it: there is someone who has ousted him."

Having starred alongside Luis Ronaldo for two years at Real Madrid, Cassano often regarded the Brazilian as the best ever, but he has now had a change of heart and has chosen Messi for that accolade.

'We were losing 1-0 at home,' Cassano said. 'The whole stadium was whistling, especially at him [Ronaldo].

'In the locker room the coach removes Ronnie to put [Ruud] Van Nistelrooy on, but he [Ronaldo] stops him and says 'no, you take me off in 15 minutes if I haven't scored two goals.'

'Minute 15: 2-1 and two goals from Ronaldo. I said that if there is a football God, it is Ronaldo. Then I discovered that Messi is above him.'