Real Madrid manager Carlo Ancelotti says he expects Karim Benzema to make a return to action in next week's Madrid derby against Atletico. 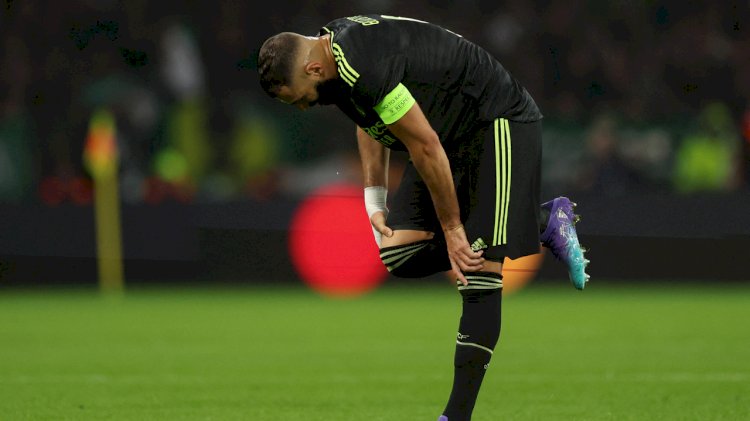 Benzema lasted just half an hour in Real Madrid's UEFA Champions League group stage opener against Celtic on Tuesday before hobbling off with a knee problem.

The 34-year-old will miss Sunday's La Liga encounter against Real Mallorca as a result and will also not be available when Los Blancos host RB Leipzig in the Champions League in midweek.

But Ancelotti is expecting Benzema to play a part against Atletico Madrid at the Wanda Metropolitano next week.

"We will not force Benzema," Madrid coach Ancelotti said. "He will certainly not play against Leipzig, but then we will see for the derby.

"If he can't play then [against Atletico], he won't go to France [for the international break]."

Benzema's replacement at Celtic was Eden Hazard, who crowned a good performance with a goal in the 3-0 victory and Ancelotti expects the Belgian and other members of Real Madrid's attack to compensate for the Frenchman's absence.

"Hazard did well coming on against Celtic. I'm going to put him in again on Sunday. Hopefully he can repeat a great game," Ancelotti added.

"I don't expect [Hazard] to play like Benzema, but I want him to play well and to connect with the other forwards."

"We don't have Karim and because he is the best striker in the world, there is no substitute for him on the market.

"But he can be replaced with other players with different characteristics.

"Vinicius is getting more consistent in finishing, in scoring goals. It is difficult for him to fail in front of the goal, there he has improved a lot.

"I want to emphasise that he continues to maintain a good attitude, with a lot of humility, work - he wants to improve every day."

Benzema has scored three goals and provided one assist in four La Liga appearances this season.

Ibrahimovic To Take Break From Penalty-Taking Duties After...