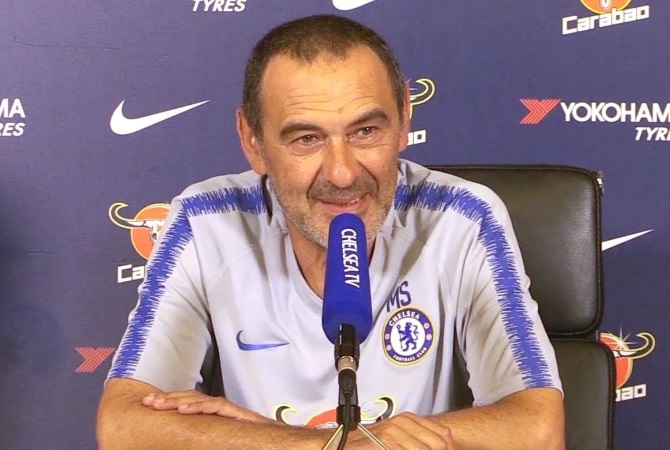 Chelsea manager Maurizio Sarri has confirmed Gonzalo Higuain’s switch to the Stamford Bridge and said the move could be done in just a few minutes from now.

The Argentine striker, who currently is on loan at AC Milan from Juventus, has been heavily linked with Chelsea, following Maurizio Sarri’s hunt for more potency at his attacking line.

Chelsea are 4th on the Premier League table and are looking to improve on their firepower to positively influence their campaign as Arsenal and Manchester United are closing in on them in the battle for a top-four finish.

Alvaro Morata has scored a paltry six Premier League goals for the Blues this term, and Olivier Giroud has been worse as he has just a goal to boast off in the elite competition.

There are reports Morata will be shipped back to Spain to join Atletico Madrid on a loan deal, and Sarri confirmed Chelsea's pursuit of Higuain and said the Argentine could become a Blue in no time.

“Sarri says Higuain is a few hours away from signing his contract at Chelsea,” wrote the club on its official Twitter handle on Wednesday.

“He says he hopes the striker can start scoring straight away, but he says there is plenty more to his game than goals. He hopes he can get him back to his best form.”

Chelsea have a crunch Carabao Cup semi-final second leg game against Tottenham Hotspurs at the Bridge on Thursday, and Sarri confirmed that the 31-year-old former Real Madrid forward will not make the squad due to documentation problems.

“Sarri says it is not possible for Higuain to play against Tottenham tomorrow after the midday deadline passed before the move has been completed,” wrote the club in a subsequent tweet.

On This Day In 2013: Eden Hazard Sent Off For Kicking Ball Boy