Zidane Insists Title Race Is Not Over

Real Madrid manager Zinedine Zidane is remaining grounded in the La Liga title race despite his side moving four points clear of Barcelona with a hard-fought 1-0 win over Getafe at the Alfredo di Stefano stadium on Thursday night. 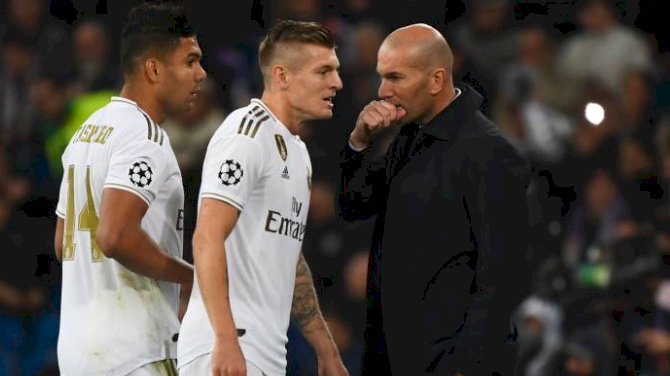 Sergio Ramos’ penalty eleven minutes from time ensured Los Blancos made it six wins on the bounce since football returned after coronavirus halted the season back in March.

Prior to football going on a three-month hiatus, Real Madrid were two points behind Barcelona but the 13-time European champions are now in the driving seat to secure only their third league title in the last ten years.

There are just five games remaining but Zidane is adamant the title race is not over.

"We had to win yes but nothing more. For us nothing changes. We have five finals left.

"We have not won anything. I know what this is like and until this is over, we cannot say anything.

"We have to keep working. We are happy, proud of the team ... the effort, the solidity that we show, is very good.

"This is football, football every three days is a new story. Today we suffered a lot, the other day against Espanyol too.

"We played against the bottom team, but they always make it difficult for you. Without suffering you cannot achieve anything."

Real Madrid are next in action against Athletic Bilbao at the San Mames on Sunday.

Jesus Incapable Of Being A Long-Term Replacement For Aguero, Says Roy Keane

Lampard Hopeful Of Swift Return To Action For Ziyech

Seeing Ronaldo For The First Time Left Me Starstruck, Andy...