A 23-year-old amateur footballer in Croatia, Ivan Gazdek, has been unceremoniously sent off for kicking a pitch-invading chicken to death. 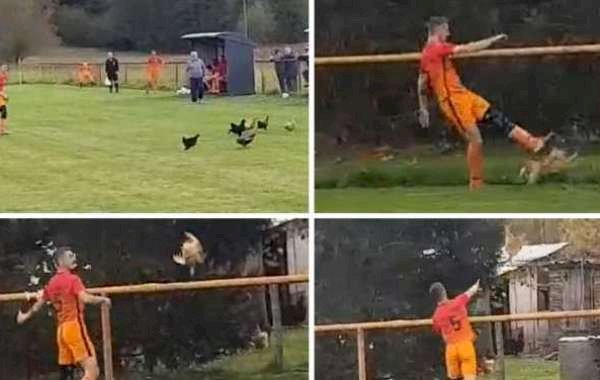 Gazdek, who plays for FK Zelengrad, took out his frustrations on the poor chicken in the middle of a nervy game where his side were leading FC Jasenovac 2-1.

The referee was unenthused by his actions and promptly gave him his marching off orders for ‘unsportsmanlike conduct.’

A video circulating on social media shows Gazdek chasing after a group of stray chickens before finally getting hold of one and aiming a kick at it, which renders the poor animal unresponsive.

He then picks it up and throws it over a fence surrounding the pitch.

He explained the situation to local news agency 24Sata: "Believe me, it wasn't intentional.

"The game was in a sensitive moment and I was nervous. Even in the dressing room, we had had a bit of a fight.

"Chickens are constantly entering the field, so the game has to be stopped. The grass is covered in poo, it's very unhygienic.

"I ran to the chickens a little to chase them away, I swung my foot and killed one by accident."

Gazdek later expressed regret for his actions and apologised to the owner of the chicken.

The footballer continued: "Immediately she removed the hen from the scene of the accident and said nothing.

"However, I was very sorry, so I sent her a letter and a new hen to apologise."

Despite Gazdek’s ‘fowl play’ leaving his team a man short, FK Zelengrad rallied together to beat Jasenovac 8-1 to emerge victors on the day.