Liverpool midfielder Thiago Alcantara has tested positive for coronavirus, the club have announced. 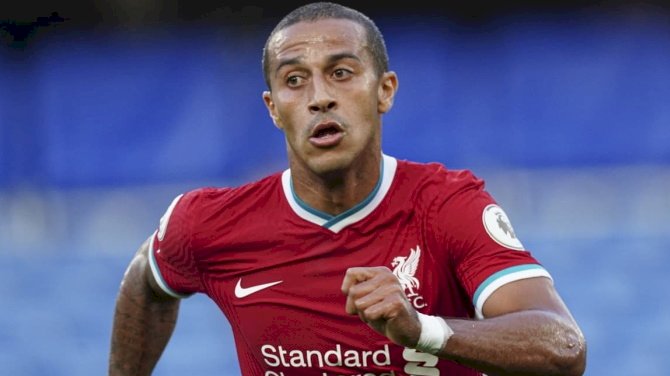 Thiago only joined the Premier League champions from Bayern Munich a fortnight ago and made his debut in a 2-1 win against Chelsea two days later, appearing as a second half substitute for Jordan Henderson.

The 29-year-old Spain international was not included in Liverpool’s matchday squad for Monday’s 3-1 victory over Arsenal at Anfield.

Thiago will undergo a period of self-isolation in accordance with UK government and Premier League protocol as a result of his positive diagnosis.

He will miss Thursday’s Carabao Cup fourth round tie with Arsenal as well as Sunday’s trip to Aston Villa in the Premier League, meaning his next appearance in a Liverpool shirt will be after the upcoming international break.

Confirming the news on their website, the champions wrote: "Liverpool midfielder Thiago Alcantara has tested positive for Covid-19 and is currently self-isolating according to the necessary guidelines.

"The 29-year-old, who missed Monday’s match against Arsenal, has exhibited minor symptoms of the virus but is in good health and is getting better.

"The club has, and will continue to follow, all protocols relating to Covid-19 and Thiago will remain in self-isolation for the required period of time.

LFC first-team doctor, Dr Jim Moxon, said: "It is the choice of each individual whether they reveal publicly the outcome of a Covid-19 test.

"We have followed all the protocols to the letter and Thiago is OK. He will be self-isolating now as per the guidelines and hopefully he’ll be back with us soon."

Drogba To Be Honoured With UEFA President’s Award

Kante a doubt but Rudiger ready for Chelsea