Manchester United goalkeeper Sergio Romero escaped unhurt after crashing his £170,000 Lamborghini on his way to training on Monday morning. 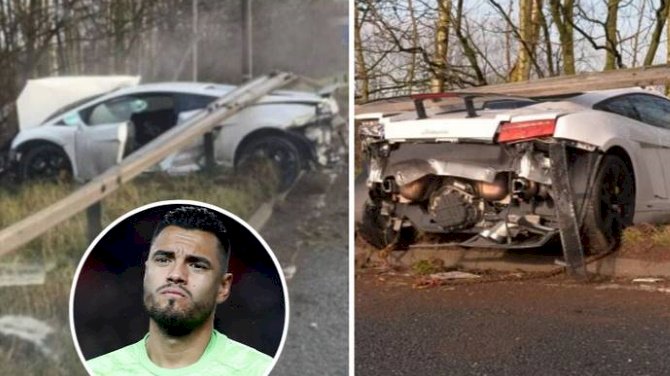 The 32-year-old run his car through a barrier on the Carrington Spur Road close to Manchester United’s training ground.

Despite the gruesome nature of the crash, Romero walked away unscathed and was pictured standing close to the smashed up car in the incident’s aftermath.

Romero, who was on the bench as the Red Devils lost 2-0 to Liverpool at Anfield on Sunday, was able to join his teammates in training.

Romero has not played a minute of Premier League football this season but has appeared nine times in cup competitions.

The former AS Monaco shot stopper is considered one of the best back up goalkeepers in the Premier League having joined on a free transfer in the summer of 2015.

Romero has played 53 games in total for Manchester United and has kept a remarkable 34 clean sheets in that time.

Romero has been capped 96 times by the Argentina national team and played in the final of the 2014 FIFA World Cup where La Albiceleste lost to Germany in the final.

United manager Ole Gunnar Solskjaer will be relieved Romero suffered no injuries with the Old Trafford club being robbed off the services of the likes of Paul Pogba, Scott McTominay and Marcus Rashford.

Manchester United return to Premier League action with a home game against Burnley on Wednesday where Romero will likely warm the bench again but he will be in contention to start the FA Cup game against Watford or Tranmere at the weekend.

'It Is An Embarrassment' – Rio Ferdinand Fires Solskjaer And Man United After Burnley...

Dembele Out For 15 Days With Sprained Injury