Former captain of the German national team and Bayern Munich legend, Bastian Schweinsteiger, has announced his decision to retire from football at the age of 35. 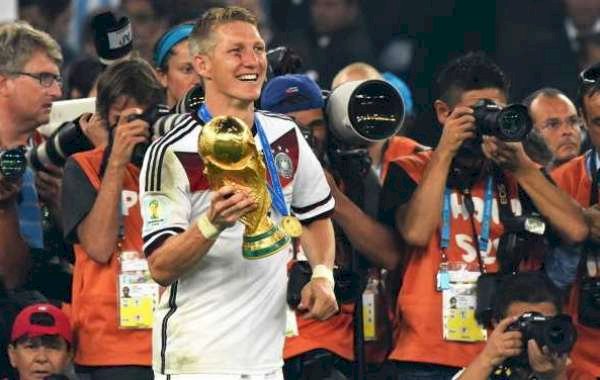 Schweinsteiger made the announcement on Twitter after current club Chicago Fire failed to secure a place in the Major League Soccer Playoffs.

The world cup winner spent majority of his career at Bayern Munich, where he won eight Bundesliga titles as well as the UEFA Champions League in 2013.

Schweinsteiger, who is married to former world number one tennis star Ana Ivanovic, joined Manchester United from the German champions in 2015, winning one FA Cup, before leaving for America.

He made his debut for the German national team in 2004 and went on to make 121 appearances for the Die Mannschaft, winning the FIFA World Cup in 2014.

In a post on social media, Schweinsteiger said: “Dear fans, the time has now come, and I will be finishing my active career at the end of this season.

“I would like to thank both you, my teams FC Bayern, Manchester United, Chicago Fire and the German national team. You made this unbelievable time possible for me!

“And of course, I would like to thank my wife Ana Ivanovic and my family for their support.

“Saying goodbye as an active player makes me feel a little nostalgic, but I am also looking forward to the exciting challenges that await me soon. I will remain faithful to football.

“Many, many thanks for the time we spent together, I will always have a place for you in my heart!”

On This Day In 2006: Zidane Headbutts Materazzi In World...