Rivaldo has been left angered by Brazil manager Tite’s decision to hand Lucas Paqueta the iconic number 10 jersey and then proceed to substitute him at half time in the friendly defeat to Argentina on Friday. 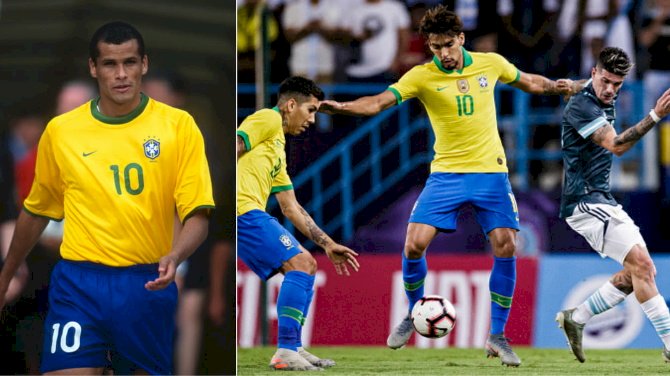 The famous number 10 jersey is considered sacred in Brazil and has been donned by some of the country’s greatest ever players including Rivaldo himself, Pele, Zico, Romario, Ronaldinho, Kaka and Neymar.

Neymar is the current bearer of the number 10 shirt but as he is currently out injured Tite has taken the decision to hand it over to the 22-year-old AC Milan man.

Rivaldo was in the number 10 jersey when Brazil won their last FIFA World Cup in 2002.

Rivaldo made 74 appearances for Brazil and scored 35 goals in the iconic number, and feels Brazil’s manager dishonored the jersey by giving it to an inexperienced player who struggled to impress against their fiercest rivals.

“I watched Brazil-Argentina and am sad to see the Number 10 shirt was given to Paqueta,” Rivaldo wrote on ​Instagram.

“That jersey is known and respected all over the world, so cannot be given to someone who ought to be on the bench or play only half the game. That is disrespectful.

“It is famous because it was worn by the likes of Pele, Rivelino, Zico, Rivaldo, Kaka, Ronaldinho and Neymar. I don’t blame Paqueta at all, but Tite and his staff ought to know how much weight that jersey puts on your shoulders.

“They must not burn out a 22-year-old like Paqueta, who can have a great future ahead of him.

"In the same way the coach went out to protect Rodrygo, who is playing very well at Real Madrid, he could have protected Paqueta from playing in the No.10. We all know that Brazil and Argentina will never be a friendly match," he concluded.

Dele Alli Attacked By Armed Robbers At His Home