A six-man shortlist for the Premier League’s player of the month for November has been released. 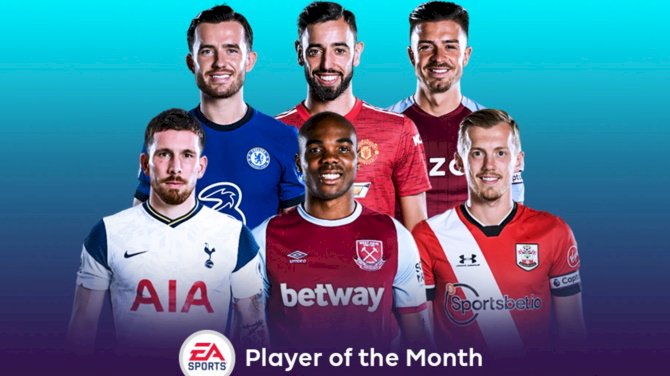 Fernandes scored four times in four games and provided one assist during the month of November to help Manchester United record three wins from four outings.

Southampton skipper Ward-Prowse underlined his status as one of the best dead-ball specialists in the division, with all three of his goals coming from direct free kicks. He also provided two assists for his teammates to help the Saints move up to sixth on the table.

Hojbjerg has provided steel in the centre of the field for table-topping Tottenham Hotspurs this season, with Jose Mourinho’s men going unbeaten during the month and keeping three clean sheets along the way.

Ogbonna helped West Ham to two clean sheets in November and scored his first goal of the season in Monday’s 2-1 home win over Aston Villa.

Grealish scored two goals and provided two assists for Villa while Chilwell scored once for the Blues and keep clean sheets against Newcastle United and Tottenham Hotspurs.

Everton’s Dominic Calvert-Lewin and Son Heung-Min were the winners for September and October respectively.

Gattuso Steps Down As Fiorentina Boss Without Managing...