Manchester United completed a first league double over neighbours Manchester City in ten years with a 2-0 victory at Old Trafford on Sunday. 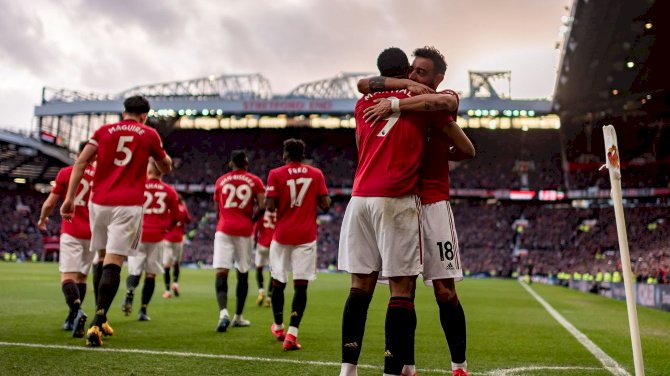 Goals from Anthony Martial and substitute Scott McTominay were all the Red Devils required to move up to fifth on the table, three points behind fourth-placed Chelsea.

The win has made Liverpool’s task of winning the league a lot easier as Jurgen Klopp’s men need just two more wins to be crowned English champions.

Raheem Sterling, without a goal in 19 previous games against Manchester United, forced David De Gea into an early save with a curling effort in the 11th minute.

Ederson in the City goal saved comfortably from Martial after the Frenchman evaded Fernandinho in the 28th minute.

Just a minute later, Bruno Fernandes’ ingenious free kick was met with a neat strike by Martial that beat Ederson at his near post to give United a first half lead.

Five minutes after the break, Ederson provided the City fans with a heart-in-mouth moment as he failed to control a back pass which was nearly pounced on by Martial, but he recovered and cleared the goal-bound ball at the last minute.

De Gea was called into action a minute later when Phil Foden’s powerful strike from the edge of the box was tipped over by the Spaniard.

As City pushed for the equaliser, United looked to catch them on the break and Daniel James nearly capitalized as he outwitted Nicolas Otamendi before stinging the palms of Ederson with a fierce strike in the 72nd minute.

The home side put the cherry on the cake in the final minute of added time when substitute Scott McTominay capitalized on Ederson’s poor throw out before bending the ball into an empty net from 35 yards out.

Predicting On The 'German Clasico'