Jurgen Klopp has won the 2019/2020 League Managers Association(LMA) manager of the year award after guiding Liverpool to their first league title in three decades. 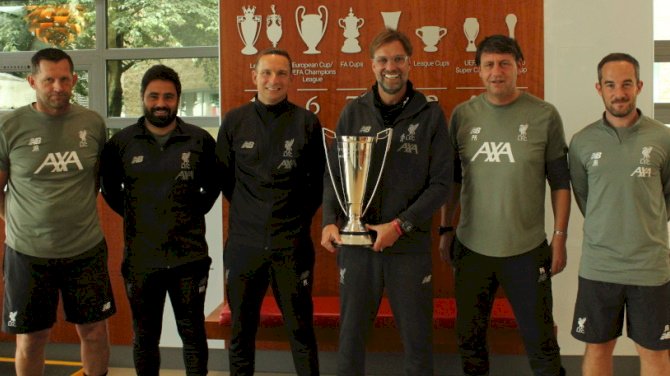 The award is named after the legendary Sir Alex Ferguson, who announced Klopp as the winner on Monday evening on Sky Sports.

The former Manchester United manager said: "Jurgen, fantastic. We speak about Leeds spending 16 years in the Championship, but Liverpool, 30 years since winning that league, incredible.

"You thoroughly deserved it, but the performance level of your team was outstanding. Your personality runs right throughout the whole club. It was a marvellous performance.

"I'll forgive you for waking me up at 3.30am to tell me you have won the league! Thank you, but anyway, you thoroughly deserved it. Well done."

"I saw who won it before, some really big, big Liverpool names involved - not only Liverpool names - like Bill Shankly I think, Bob Paisley, Joe Fagan and Kenny [Dalglish] whose name seems to be all over the trophy. Brendan [Rodgers] also won it, which was well deserved.

"But the name on this is Sir Alex Feguson's and I know it's not 100 per cent appropriate as Liverpool manger but I admire him, not to say I love him.

"He was the first British manager I met and we had breakfast together. I'm not sure if he remembers it but I remember it still because in this moment it was for me like meeting the pope if you want. It was absolutely great and from the first moment we really clicked.

"I wouldn't have thought one day I would be holding a trophy in my hands that was named after him."

Klopp added: "I have to say thank you to a lot of people - and I know it is easy to say - but I am here on behalf of my coaches.

"I'm okay as a manager, but they make us a really special bunch of football brains and I love to work with them together. Pep Lijnders, Peter Krawietz, John Achterberg, Vitor Matos and Jack Robinson - it's a pleasure. I could carry on with the list because we have so many great people here who make it happen.

"To my players, all of you who I have worked together with, I take this and I love it for all of us. Thank you very much, a very special season with a very special award at the end. Thank you I am really honoured to get it."

PSG To Miss Mbappe In Champions League Quarterfinal With Atalanta