Manchester City beat Liverpool 5-4 on penalties in the Community Shield at Wembley Stadium on Sunday following a 1-1 draw in regulation time. 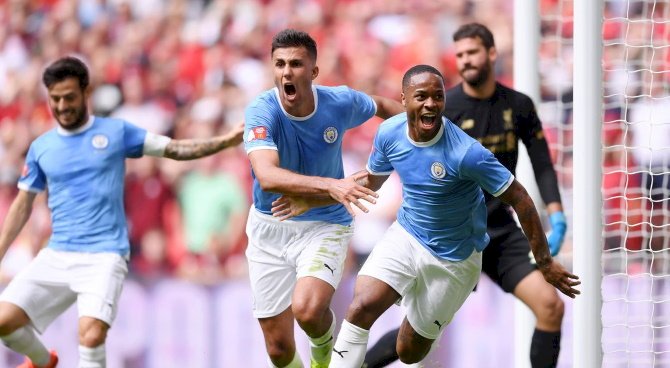 The champions forced Liverpool into early errors as Raheem Sterling robbed the ball off Joe Gomez’s feet in the 5th minute and played Leroy Sane through but the German hit the side-netting from a tight angle.

Roberto Firmino responded for Liverpool almost right away, showing great improvisation to get away from two City defenders, before hitting a snap shot straight at Claudio Bravo.

Salah dragged his shot wide of Bravo’s left post after being played through by Firmino in the ninth minute before an injured Leroy Sane was hauled off for Gabriel Jesus shortly after.

Manchester City caught out Liverpool from a free-kick, allowing Raheem Sterling to poke in David Silva’s flick for the opener in the 12th minute.

Salah outpaced Zinchenko down the right and drove into the box but his effort struck the near post before going out for a goal kick.

After the break, Liverpool hit the post in quick succession; first Virgil van Dijk volleyed a corner which bounced off the underside of the crossbar in the 58th minute before Salah struck the outside of the post with a low drive.

Substitute Joel Matip headed in Liverpool’s equalizer with thirteen minutes to go when he got to the end of a cleverly lifted ball from his defensive partner Van Dijk.

Liverpool had a flurry of chances to win the game with the best one falling to Mohamed Salah deep into stoppage time but Kyle Walker acrobatically cleared the Egyptian’s goal-bound effort off the line.

Without the benefit of extra-time, Georginio Wijnaldum was the only one to fluff his lines in the penalty shootout as Claudio Bravo saved his effort, allowing Gabriel Jesus to bury the decisive spot kick.

Dele Alli To Miss Tottenham’s Start To The Season