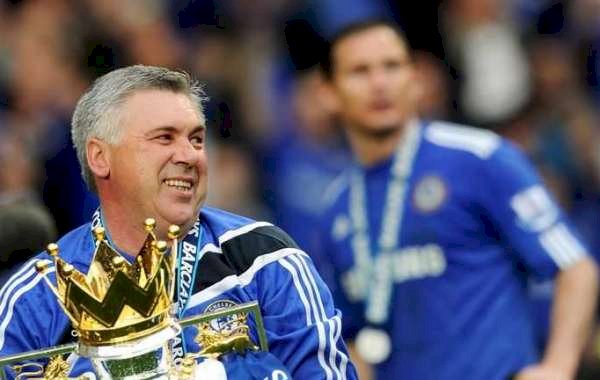 The former AC Milan boss became one of the very few managers to have won the Premier League at the first time of asking when he steered a formidable Blues side to their fourth league title in English football.

Chelsea finished the 38-game campaign with an amazing 103 goals - a Premier League record only bettered by Pep Guardiola’s Manchester City in the 2017/2018 season.

Both Didier Drogba and Frank Lampard had an outstanding season while Florent Malouda and Nicholas Anelka gave the West Londoners a lot of options in the final third.

In an exclusive interview with Sky Sports' Jamie Carragher, Ancelotti, who is currently the head coach of Everton, was talking about his distinguished managerial career.

The Italian recalled his wonderful time at Stamford Bridge, and revealed why he had a difficult second season at Chelsea.

"The second year was more difficult, but the first year was really fantastic,” the 60-year-old said.

“The club had the goal for the Champions League, but the fact that in the first year we won the Premier League and the FA Cup was really important and really exciting.”

"The second year was more difficult, I think, because we had some problems. We had [Didier] Drogba with malaria and these kinds of problems.”

"Drogba was fantastic. In the first year, he scored 36 goals but to mention Drogba means to forget [Nicolas] Anelka, for example, [Florent] Malouda, Joe Cole, [Salomon] Kalou, Michael Ballack in the middle, [Michael] Essien, Deco and at the back, Alex, [Branislav] Ivanovic, Ashley Cole so the team really, really was a fantastic team.”

"When I arrived, the team was there, I didn't build the team, so I was really excited to train these kinds of players with this kind of power.”

“Imagine when you needed to prepare set pieces, you had John Terry, Alex, Drogba, Ballack to jump so it was not so difficult to score on set pieces.”

Lampard is now the head coach of Chelsea and Ancelotti has admitted he is not surprised as the Englishman always had a fantastic tactical quality even when he was a player.

"I'm not surprised [to see Lampard as a manager] because as a player, Frank had fantastic tactical qualities,” he added.

“I'm waiting now for Terry as a manager, now he's an assistant, but I think they both have the qualities to be a good manager. Of course, Frank is doing really well at Chelsea now."