Raphinha has lauded former Leeds United manager Marcelo Bielsa for the impact he has had on his career. 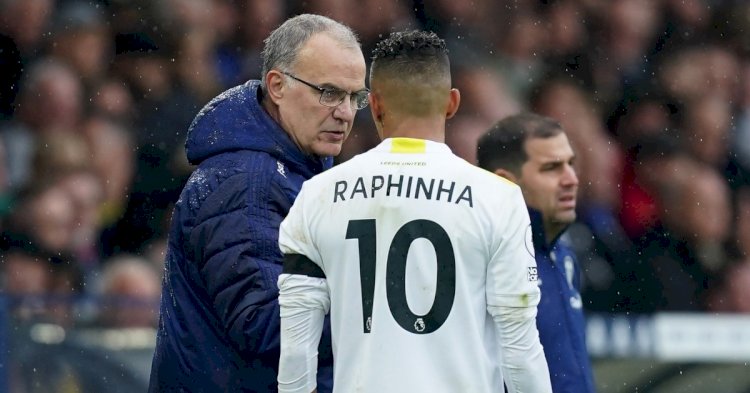 It was Bielsa who brought Raphinha from the French Ligue 1 to the Premier League when he moved from Rennes to Leeds in the summer of 2020.

Raphinha has since blosommed to become a full Brazil international and has secured a move to Spanish giants Barcelona in the off-season.

Raphinha is already off the mark in Barcelona colours, scoring in the 6-0 rout of Inter Miami in a pre-season friendly on Wednesday and laying on two assists.

The former Vitoria Guimaraes and Sporting Lisbon forward scored 17 goals in 65 Premier League appearances for Leeds but Bielsa was sacked by the club in February as the Whites battled relegation before securing safety under Jesse Marsch.

Nonetheless, Raphinha is grateful to Bielsa for taking his game to the next level.

"He was very important for me," Raphinha told Barca TV. "He got me out of France, gave me confidence, and then I managed to get to the Brazil team, with the way he made me play, he got the most out of me.

"My real dream was to play professionally in Brazil, to show my work for the Brazilian fans. I didn't get it but I had another opportunity, to stay in Europe. It was closer to my dreams, arriving here, playing in the Champions League, playing with Brazil. Today I am realising a bigger dream."

Raphinha is hoping to follow in the footsteps of some famous Brazilians who have been successful with Barcelona over the years.

"When the team goes well, the individual shows up, I really want to win the league, the Champions League, everything," he said.

"Individually, I have the dream of winning the World Cup with Brazil and I will stay at Barca for many years. It was a dream to follow in the footsteps of Ronaldinho and Neymar, Dani Alves too, Romario, Ronaldo, Rivaldo, they are the Brazilian idols.

"Following in their footsteps is a huge honour for me, there are no words to explain the feelings. I always talk about Ronaldinho, because since I remember that I began to understand football, it was when Ronaldinho arrived at Barça, I always saw him play, do spectacular things."

‘Something Has To Change’- Arteta Condemns Abuse Of Steve...