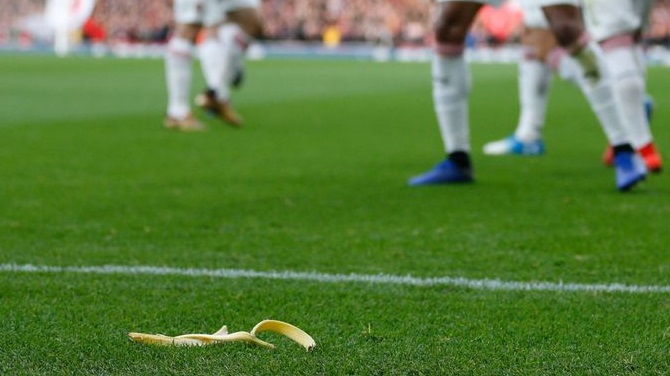 A Tottenham Hotspurs fan has been arrested for throwing a banana skin at Pierre Emerick Aubameyang as the Gabonese celebrated his second goal for Arsenal in Sunday’s North London Derby.

Aubameyang struck twice for the Gunners in the 4-2 victory over Spurs, but it was his second goal to draw Arsenal level at 2-2 that irked the away section of the Emirates stadium occupied by the Tottenham faithfuls.

A Tottenham Hotspurs spokesperson has confirmed that the fan has been arrested and will be banned.

"Behaviour such as this is completely unacceptable and the supporter in question will be issued with a ban," a Tottenham spokesman said of the incident.

As is typical of most derbies, Sunday’s game was not without its usual controversies.

Eric Dier equalised for Spurs after Arsenal had taken the lead through Aubameyang, and the England midfielder celebrated in front of the home fans with a finger on his lips.

The incident resulted in a brawl between some players of both sides, prompting Spurs manager, Mauricio Pochettino, to run towards the corner line to help calm tempers.