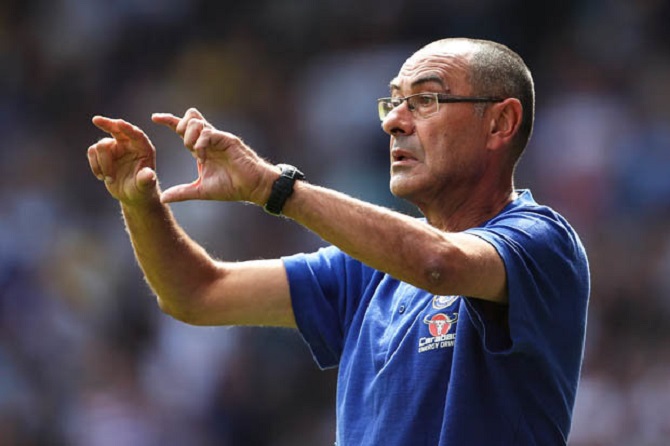 After moving to 2nd place on the league table behind Liverpool, Chelsea Manager Maurizio Sarri has claimed that the current standings are ‘not important’.

The Blues have won all three league games thus far, but are behind the Merseyside club who have two more goals.

Speaking on his side’s position after Chelsea's 2-1 win at Newcastle United, Sarri refused to be excited and said his joy would be in how they finish.

“Nothing, I think, because the honor is after 38 matches. So after three games, it is important to start very well, as well as possible, but now the table is not important, I think.”

The Italian trainer opted for a 4-3-3 system as Rafael Benitez chose a compact 5-4-1 approach. Though Chelsea enjoyed 81 percent of the possession as against Newcastle's 19 percent, the visitors fell short of openings.

“It’s not too easy to play here, this match has been more difficult than Italy."

“In Italy these tactics were usual, but I never saw Rafa play with five in defence, so at the beginning, I was really surprised. It was so difficult for us. Newcastle were so compact. We needed to move the ball very fast. Winning here shows the character of my team. Our character is strong.”

Chelsea kept up their 100 percent start to the Premier League season by snatching a 2-1 win over stubborn Newcastle United on Sunday.

The Blues grabbed the winner through DeAndre Yedlin 87th minute own goal after Joselu had canceled Eden Hazard’s 76th-minute controversial penalty goal in the 83rd minute.

Antonio Rudiger and Eden Hazard took turns to shoot wide in the 17th and 21st minutes, before Salomon Rondon blew the hosts' first chance with a stray header from close range.

Alvaro Morata tried a through ball in the 64th minute, but Cesar Azpiliqueta was caught offside. Antonio Rudiger hit the bar in the 71st minute with a right footed shot, five minutes, after which Fabian Schar tripped Marcos Alonso to give Chelsea a penalty that was converted by Eden Hazard.

Newcastle United got into the game after the goal, and Joselu headed home Kennedy's cross at the blindside of David Luiz.

Marcos Alonso pounced on Olivier Giroud's cross to direct a left footed shot wide in the 87th minute, few minutes before DeAndre Yedlin hit the ball into his own net in his attempt to clear Alonso's stray shot.

Marcelo unhappy about being substituted

Hudson-Odoi To Miss Rest Of Season With Achilles Injury