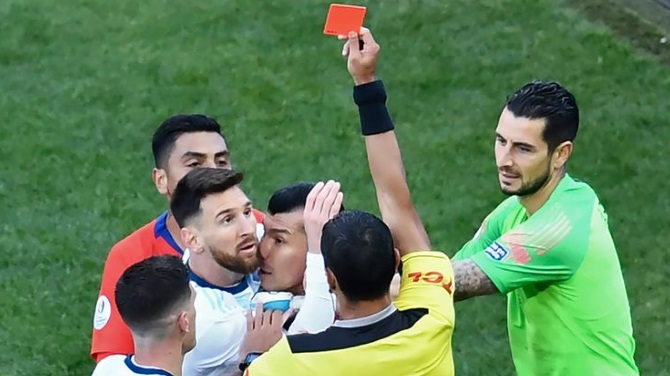 Argentina captain Lionel Messi has slammed the 2019 Copa America as ‘corrupt’ and fears the final game between Brazil and Peru could be rigged in the hosts favour.

Messi received his marching off orders, alongside Chile’s Gary Medel in the third-place play-off after the pair clashed a few minutes before half-time.

That red card was only the second of Messi’s professional career with his first coming less than a minute into his Argentina debut 14 years ago.

Although Argentina won the third-place play-off game 2-1, with goals coming from Sergio Aguero and Paulo Dybala while Arturo Vidal halved the deficit for Chile, the major talking point of the game was obviously Messi’s dismissal.

Messi had previously berated officiating at the tournament after Argentina’s loss to Brazil in the semi-finals and after failing to appear for his bronze medal after the game, the five-time Ballon d’or winner suggested his red card was as a result of his previous comments and that the final could be rigged in Brazil’s favour.

"There is no doubt, the whole thing is set up for Brazil," Messi told reporters.

"I hope the VAR and referees don't play any part in the final and that Peru can compete but it looks tough to me.

"We could have gone further but we weren't allowed into the final. Corruption, referees and all the rest stopped people from enjoying the football.

"I always tell the truth and I'm honest, that is what keeps me calm, if what I say has repercussions that is not my business.

"I think that what happened is because of what I said [against Brazil].

"What I said last time perhaps came back to haunt me. With a yellow card that was the end of it."