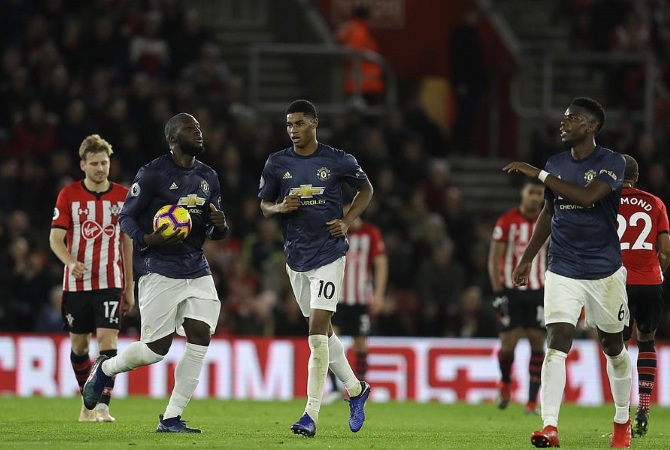 Manchester United conceded two quick early goals, but equalised quickly enough as the Red Devils rallied from behind to draw 2-2 with Southampton at the St. Mary's Stadium on Saturday.

All goals were produced in the first half with Southampton shooting ahead in the 13th and 20th minutes through Stuart Amstrong and Cedric Soares respectively.

Romelu Lukaku drew a consolation goal for Manchester United in the 33rd minute before Ander Herrera drew parity six minutes later to set the stage for a pulsating second half, but which could not turn up to be so because both sides reduced in intensity and desire.

The second half saw Jose Mourinho’s Red Devils dominating possession but lacking the hunger to probe for goals against Mark Hughes’ Saints who looked recoiled but dangerous on the counter breaks.

The result keeps Manchester United at the 7th position on the league log with 22 points, same as Southampton, who still sit at the 18th position with nine points.

Mourinho lined up a five-man backline with natural midfielders, Scot McTominayand Nemanja Matic, drafted into central defensive positions in a 5-3-2 system, against a side which had managed just 10 goals in 13 games before the matchday-14 clash.

Southampton were the brightest after the start and pinned Manchester United deep into their own half.

But, it was the latter who recorded the first chance of the evening when Romelu Lukaku forced a decent save from Alex McCarthy with an equally decent strike in the 3rd minute.

Manchester United’s numbers at the back did not count in the 13th minute as Obafemi Michael picked up the ball at the edge of the box to set free Stuart Armstrong, who beat David de Gea with a shot into the left side of the net.

The excitement had barely died down among the Southampton faithfuls when Cedric Soares curled in a free kick from 15 yards after Marcus Rasford had fouled Nathan Redmond close the box.

Manchester United lifted up their game after the goal and Romelu Lukaku reduced the deficit in the 33rd minute by finishing Marcus Rashford’s precise pass with a thunderbolt into the right side of the net.

Another goal followed for Manchester United six minutes later, yet again, with Marcus Ransford holding his own against three markers to pull a pass into the six-yard-box for Ander Herrera to backheel through the hands of Alex McCarthy.

The visitors dominated possession in the second half, but rued Paul Pogba, whose showboating resulted in the side losing possession in a lot of attacking moves.

Fred 'Angry' To Lose Brazil Spot Due To United Struggles