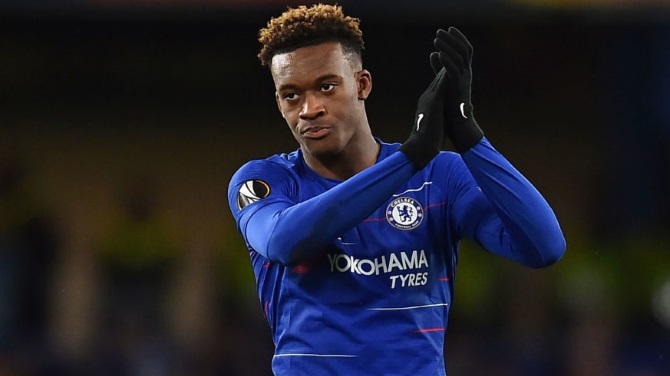 Callum Hudson-Odoi’s season-ending injury will not deter Chelsea from offering the English teenager a new contract.

Hudson-Odoi was forced off with an achilles tendon injury in Chelsea’s 2-2 draw with Burnley at Stamford Bridge on Monday.

Although the prognosis for Odoi’s injury is yet to be revealed, achilles tendon injuries usually take around four months to heal, meaning that the 18-year-old English international would play no part in the remaining three weeks of the ongoing season.

The unfortunate setback leaves Hudson-Odoi racing against time to be fit for the start of next season which means he is also likely to miss England’s Nations League semi-final game against the Netherlands on June 6 in Portugal.

Despite all these obstacles, Chelsea are keen to hold onto their academy graduate, who was the subject of a £35m from German champions, Bayern Munich, in the January transfer window.

Hudson-Odoi submitted a transfer request when Bayern Munich tabled their offer, after becoming frustrated over a lack of first-team opportunities whiles his peers, like Jadon Sancho of Borussia Dortmund, were sparkling for their sides.

Chelsea manager Maurizio Sarri has given Odoi the opportunity to claim a place in the starting eleven in recent weeks, with Monday’s start his fourth in the Premier League since making his debut for the Three Lions in March.

Chelsea will hope to take advantage of Odoi’s increasing involvement in the first team to offer him fresh terms on a deal that expires in the summer of 2020 or risk losing him for free.

Bayern Munich will likely come in with another bid in the summer as they seek to replace veterans Arjen Robben and Franck Ribery, who will depart the Allianz Arena at the end of the season.