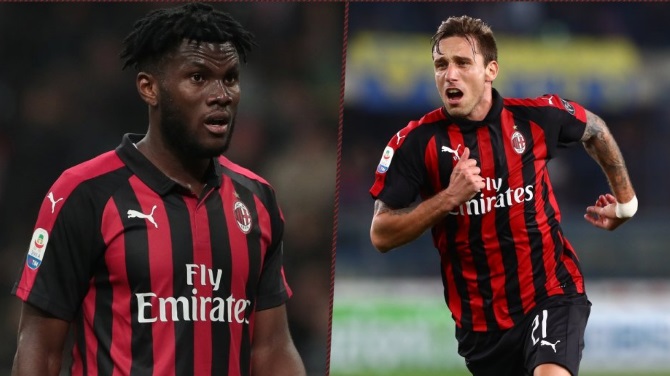 AC Milan pair Frank Kessie and Lucas Biglia have apologised for their bust up on the bench during the derby defeat to Inter Milan on Sunday.

The Rossoneri went into the game as clear favourites on the back of five successive league wins, but it was Inter who upset the form book and run out 3-2 winners on the night.

Frank Kessie was replaced by Andrea Conti after 69 minutes with Inter holding a 3-1 lead at the time, and the Ivorian looked visibly enraged as he headed for the bench.

Lucas Biglia, who was an unused substitute in the game, appeared to say something to Kessie as he headed for a seat on the bench, leaving the former Atalanta man to react angrily towards the Argentine.

Kessie had to be restrained by team mates to prevent tempers from further flaring, and the pair regretted their actions after the conclusion of the game.

"It was [down to] the adrenaline of the match," Kessie told Sky Sport Italia.

"I was frustrated about coming off and wanted to do more”.

"I took it out on Lucas, which was a mistake. I apologised after. He is older than me and I should look to him to learn. I am sorry."

Rather than letting their frustrations get the better of them publicly, Biglia believes he and his teammate should have settled their differences in the dressing room.

"Franck knows what I said and we clarified things after," Biglia added. "We all wanted to win, but this isn't something we should be doing in front of everyone. We should maybe save it for the dressing room.

"Above all, we feel bad for this embarrassing situation. I feel ashamed and have apologised to the team and the coach personally.

"It's not what we wanted. We embarrassed the club we represent. It won't happen again."

AC Milan have now dropped to fourth on the Italian Serie A table although they hold a four-point lead over fifth placed AS Roma.

Nasri: West Ham United Is 'Best Job In The World'