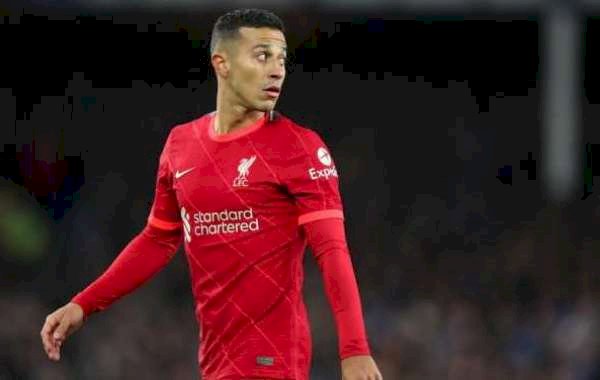 Thiago joined Liverpool from Bayern Munich last season but struggled to impress in his debut season at the club amid fitness problems and Coronavirus infection.

Liverpool did not have the best of seasons last term and even struggled before making the top four, leading to suggestions that Thiago was not suited to their style of play.

The 31-year-old has impressed this season, underlying his improvement particularly in Liverpool's last two matches against Manchester City in the FA Cup and Manchester United.

Thiago has made 30 appearances across all competitions this season, scoring two goals.

Klopp is happy he never listened to the naysayers and stuck to his guns on the former Barcelona midfielder.

"People questioned if he suits us? Thank God these people don't make decisions," Klopp said ahead of Sunday's Merseyside derby against Everton.

"If a player calms games down in moments, it's just of course nothing we thought. Thiago wanted to join us and he knew how we play. He thinks a lot about football.

"I don't like to talk too much about one player. Not that he doesn't deserve it but I leave this room and I can hear that such and such a player is injured, so let's just carry on."

Liverpool have already won the Carabao Cup this season and are still battling on three other fronts but he insists his charges are embracing the pressure that comes with it.

"[They don't enjoy it] all the time, but a lot. It's an incredibly tough situation and we play pretty much all the time," he added.

"We love the situation we are in. You cannot plan being in everything. We won one competition, that's great, but there are still three more competitions to go.

"We are looking forward to everything that is coming up."

Griezmann Resentful With Barcelona For Leaving Him Hanging

Everton Condemn Chelsea To Another Premier League Away...