Borussia Dortmund have rebuked their own supporters for breaching coronavirus protocols to celebrate Saturday’s Revierderby victory over Schalke 04. 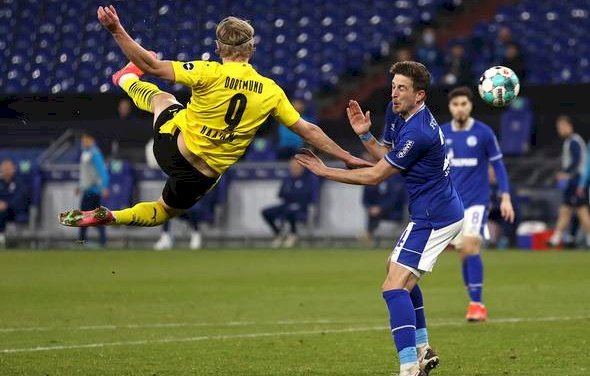 Dortmund put four unanswered goals past Schalke at the Veltens Arena, with a brace from Erling Haaland and a goal apiece from Jadon Sancho and Raphael Guerreiro inflicting more damage on the Bundesliga’s bottom club.

The win moved Dortmund to within six points of fourth placed Eintracht Frankfurt, who claimed a deserved 2-1 win over champions Bayern Munich.

Dortmund’s fans could not hide their happiness and thronged to the club’s training grounds to celebrate the win, ignoring coronavirus protocols in the process.

But the club have issued a statement expressing discontent with the situation and are prepared to take action against the perpetrators.

An official statement on Dortmund's website reads: "With all the understandable joy of winning the derby, there were public violations of the coronavirus rules during the team's return to the training ground last night, which will not be tolerated.

"Around 150-200 fans cheered the team outside the training ground, some of whom were not wearing masks and observing social distancing guidelines. Players celebrated with the fans – without leaving the bus – and in the exuberance some even filmed it.

"We can only apologise and promise to talk to the police and all those involved very soon about how such scenes can be completely ruled out in public in future."