AS Roma Sign Sergio Oliveira From FC Porto On Loan

AS Roma have completed the signing of Portugal international Sergio Olivieira on loan from FC Porto until the end of the season. 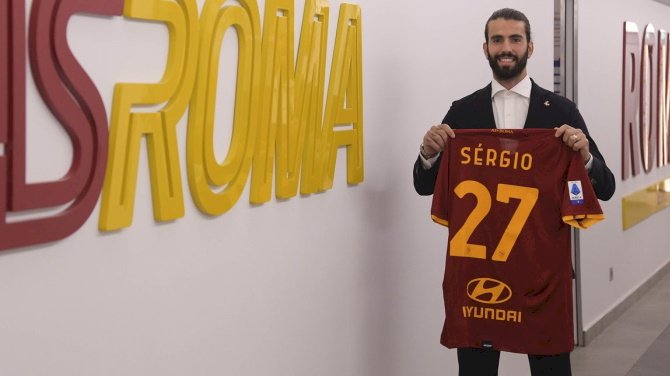 Jose Mourinho’s side have the option to make the deal permanent.

Oliveira is Roma’s second loan signing of the January transfer window, with England international Ainsley Maitland-Niles having joined from Arsenal on similar terms.

“The club is delighted to announce the signing of Portugal international Sergio Oliveira,” Roma statement read.

“Oliveira, 29, joins from Portuguese side FC Porto on an initial loan deal until 30 June 2022.

“As part of the agreement, an option has been included that would enable the Giallorossi to make the transfer permanent.”

Oliveira, who has 13 caps for Portugal, added: “It’s amazing to be here at this great club.”

“Roma have always shown a real interest in me and now I want to try and immediately help the team to achieve all its targets and continue to develop the right mentality.

“I am certain that my new teammates, alongside whom I cannot wait to start working, will help me continue to improve too.”

“Sergio Oliveira is a player that will add quality and character to our squad,” said Roma General Manager Tiago Pinto.

“He has won a lot during his career and has gained experience at the highest levels, representing both his club and his country in some of the most important competitions in the world.

“His desire to join Roma was decisive in us being able to find an agreement: we believe it is very important that we continue to bring in players that are eager to play for this club.”

Barcelona Rocked By Resignation Of Six Board Members