Premier League strugglers Aston Villa have signed AC Milan goalkeeper Pepe Reina on loan until the end of the season. 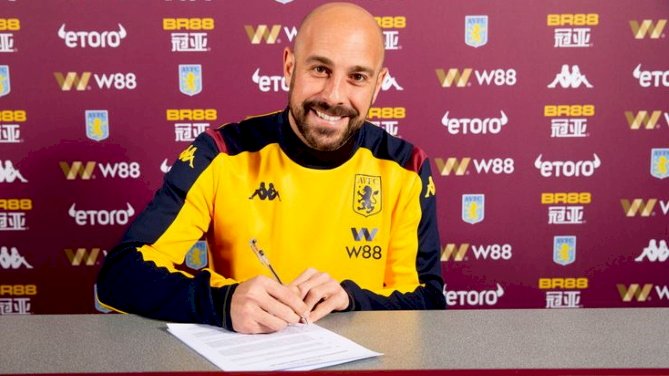 Villa were in need of a goalkeeper after first choice Tom Heaton suffered a season-ending knee injury at the start of the year.

Reina comes with a wealth of experience having played for the likes of Barcelona, Liverpool, Bayern Munich and Napoli.

He was part of the Spain squads that won the FIFA World Cup in 2010 as well as the 2008 and 2012 European Championships.

The 37-year-old has made just one Serie A appearance for AC Milan this season and five in total since joining from Napoli in 2018, playing second fiddle to 20-year-old Gianluigi Donnarumma for most of his time at the San Siro.

Speaking to the club's website, Reina said: 'It is a great dressing room, and I have been told they are great lads.

'Now we need a mentality to be strong and to be ready for a good battle. We need to play with discipline and remain determined. These kinds of things need to be our basics.'

Head coach Dean Smith added: 'We've managed to secure a player in Pepe who has a wealth of Premier League experience.

'At the start of the summer we were looking for an experienced goalkeeper and brought in Tom Heaton.

'Unfortunately, his injury has ruled him out for the rest of the season but Pepe fits our criteria not just because of his experience but also because of his leadership qualities.'

Reina could make his debut for Aston Villa against Brighton and Hove Albion in the Premier League this weekend.

Guardiola Praying Against Man City Injuries Ahead Of International...

Conte Pleads For Patience As Spurs Slump To Third Loss...