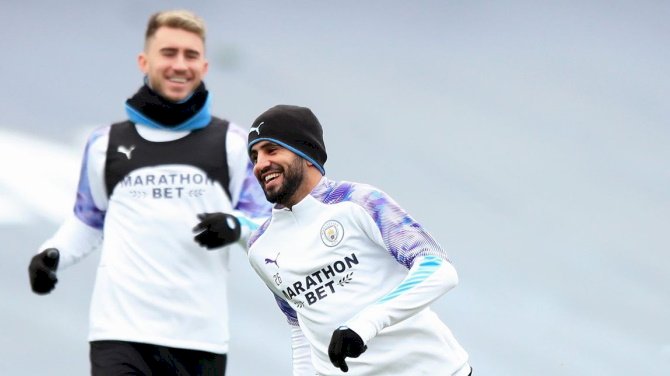 The two players are currently asymptomatic and are observing a period of self-isolation as per Premier League and UK government protocols.

Unlike most of their teammates, Mahrez and Laporte have not been away on international duty for their countries.

Laporte was not called up for France’s UEFA Nations League matches against Sweden and Croatia while a lack of continental games on the African scene means Mahrez has not been bothered by the Algeria national team.

City said in a statement: 'Manchester City FC can confirm that Riyad Mahrez and Aymeric Laporte have tested positive for Covid-19.

'Both players are currently observing a period of self-isolation in accordance with Premier League and UK Government protocol on quarantine. Neither is displaying symptoms of the virus.

'Everyone at the Club wishes Riyad and Aymeric a speedy recovery ahead of their return to training and the new season.'

Mahrez made 50 appearances in all competitions for Manchester City last season, scoring 13 goals while Laporte turned up 20 times for the Cityzens.

Manchester City will not be in action when the Premier League resumes this weekend as their opening game against Aston Villa has been rescheduled because of their participation in the latter stages of the Champions League.

Pep Guardiola’s men will start their campaign against Wolverhampton Wanderers on September 21.

Coman Out For Months, Bayern 'Won

Giroud Keen On Remaining A Chelsea Player Until End Of...