Chelsea manager Frank Lampard is optimistic Hakim Ziyech will build on Wednesday’s impressive Champions League performance against Krasnodar after a difficult start to life as a Blues player. 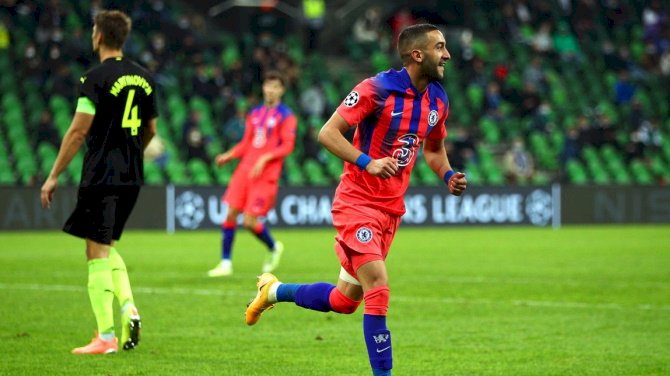 Ziyech joined Chelsea for €40m from Dutch giants Ajax Amsterdam in the summer but suffered an injury in pre-season which delayed his debut for the club.

After three substitute appearances for Chelsea, Ziyech made his first start for the club against the Russians and marked the occasion by scoring his side’s third in a 4-0 win.

Callum Hudson-Odoi, Timo Werner and Christian Pulisic all found the back of the net for Lampard’s men but Jorginho had earlier missed a penalty.

"Hakim was fit today, the first time he's really been fit to start a game," Lampard said during his post-match news conference.

"He has worked really hard to be fit and I was very keen to get his quality into the team.

"We saw that for the whole period he was on the pitch. He brought a lot of quality and calmness and got a well-deserved goal."

"I thought his performance was very very good when you consider he hasn't started a match since March when the Dutch league finished."

"So I have been very excited to get him on the pitch so it has been frustrating for me and for him that his injury hasn't allowed him to start.

"But what I have seen in training so far and what I knew we were signing as a player was a player with immense quality and personality to receive the ball, assist and find goals.

"We saw a lot of glimpses of that today. We brought him in to do a job and maybe people have forgotten a bit because we signed him in January and he missed the start of the season. Tonight, he certainly showed he is here."

Chelsea’s win has taken them to the top of their group on four points, ahead of Sevilla on goal difference.

“When He Stops Playing, I’m Throwing Away My TV”- Vieri Wowed By Messi’s Juve Show