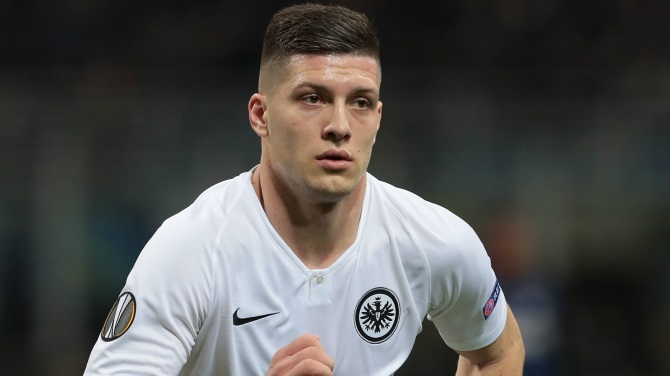 Real Madrid have completed the signing of highly-rated Serbia striker Luka Jovic from Eintracht Frankfurt for an undisclosed fee, believed to be in excess of £60m, on a six-year deal.

The 21-year-old emerged as one of the breakthrough acts in the 2018/2019 season, scoring 27 goals in 47 appearances for Frankfurt as the Bundesliga side made it all the way to the Europa League semi-finals.

Ten of Luka Jovic’s goals came in the Europa League, including two against Chelsea in the semi-finals, as the German side bowed out on penalties in the last four.

A brief statement from the Liga giants on their official website read: “Real Madrid CF and Eintracht Frankfurt have agreed to the transfer of player Luka Jovic, pending a medical examination.

Jovic only joined Frankfurt for £6m in April after the German club exercised their option to make his two-year loan deal from Portuguese side Benfica permanent.

“From a sporting point of view selling Luka Jovic is a big blow,” said the Eintracht Frankfurt sporting director, Fredi Bobic. “His explosiveness and capacity to score goals propelled us into Europe and we have benefited from more than just his goals in the past two years.

“But it was clear that there was a limit to what kind of bid we could refuse. For Eintracht Frankfurt this is a good and important transfer. We wish Luka all the best in the future. He has all the attributes to have a great career. And we are proud that we have supported him on his way.”

Real Madrid will look add two more signings before the conclusion of the week after a poor season that saw them finish third in La Liga, 19 points adrift champions Barcelona with Chelsea’s Eden Hazard and Olympique Lyon left back, Ferland Mendy, closing in on switches to the Santiago Bernabeu.

‘We Cannot Afford It’- Guardiola Hesitant About Finding...